A friend is leaving a job that she loves, to do more things she loves, and because I had been helped through this, years back, I knew what to say.

Back in the day, I was miserable.

It was near the end of my senior year at Commonwealth School in Boston and all around, people were planning the next year, without me. Spring air wafted in through open windows while people discussed the new classes being offered and the classes I loved that were being cut because the teachers who created them were moving on to colleges also. Old books were being discarded, new books arriving in large boxes. As I worked one of my last few sessions in the school kitchen with Ila Moore, the chorus in the next room was singing, with vigor but without seniors, Mozart’s Laudate Pueri Dominum, which we had sung when I was in ninth grade. It’s a rousing piece, but in my cocoon of misery I sang along softly as I chopped carrots and mourned. The bell rang, and I went upstairs, but nothing was quite familiar. The building had already been painted in anticipation of changes. The carpeting was new, the beloved couch in the lobby replaced. The lockers had been emptied, bulletin boards stripped. The founding headmaster, Charles Merrill, was retiring, and had largely dismantled his glorious office, putting trinkets from all over the world outside for students and faculty to take as a memento. “It’s like a free yard sale!” a friend exclaimed. But it felt more like a selective eviction, with some people staying.

As part of daily life Commonwealth had us students work for the school on teams in rotation, two weeks of a meal job, two weeks of a non-meal job, and two weeks off. The building becomes yours when you don’t just use it, but also maintain it. I had swept these floors and dusted these stairs and bookcases. The artwork, freshly rehung, was a mixture of reprints of classics and original works by faculty and students. I had seen some of these painted, and had helped to hang others. How could I think of leaving this place? How could they think of carrying on without us 41 seniors, the largest class in the school’s history at the time? How could Mr. Merrill leave? How could we let him? What, if anything, were any of us thinking?

Walking around what felt like the detritus of my education, I remembered that I hadn’t asked my “little sister” to sign my yearbook. Azania’s mother was one of the first alumnae or alumni to have a child attend the school, and like me, she had come from the Boston Public Schools, which made the rigor of Commonwealth something of a shock. But she was hard working, kind, and had common sense and a cheerful nature which made it a joy to be around her. She was firmly a part of the weave and weft of the school now. I found her on the third floor, just outside my advisor’s classroom. Mr. Hughes called me in for a quick chat while Azania and her friends signed my yearbook.

Mr. Hughes had the corner room, overlooking both Commonwealth and Dartmouth. He had a four-sided spinning bookcase from which he often pulled books to read from to us. He had taught me how to write clearly but in my own voice. He had comforted me in times of crisis and had explained exactly what I was doing wrong when I’d run aground. Today, he was almost playful. He lowered his glasses on his nose to see me better and with his huge smile that suggested delightful surprises ahead, asked, “So, what classes do you anticipate taking at Wellesley?”

The question startled me. I had been busy with preparation for AP tests and finals, and then I was blindsided by the changes around me. I frankly had not given the matter much thought yet.

I chose the College because it had a good English department and offered Russian, so part of my schedule was a foregone conclusion.  I needed to take a science, so I chose Chemistry. I wanted to teach, so I would have to take Psychology. But there were gaps which I could fill in by choosing almost anything once I arrived on campus in the Fall. I had forgotten — there would be so many more classes than even Commonwealth could offer. Wellesley had a sprawling campus full of  buildings devoted to and equipped for subject matters — science, music, academics — so many faculty, so many subjects, and almost all open to eighteen year-old me!

Paradigm shift had begun. My mind had left its dark place and drifted up Route Nine to the college that awaited me. Proverbs 15:23 came to mind; “[…] a word in due season, how good is it.”

But there was more.

When I stepped into the hallway, Azania handed me my yearbook and ran off to her next class. I opened it and read what she had written.

More things I had forgotten.

Wellesley’s two mottos had inspired me. One, “Non ministrari, sed ministrare” (which the volley ball team proudly translated on their tee shirts as “Not to be served unto, but to serve,”) was in complete accord with everything my father had taught me about our purpose in life, to love God and love each other and to show that love through service.

I took in a deep breath of Spring, books, the familiar, and a hint of the unknown, and smiled.

I had been calling the ceremony we were preparing for “graduation,” but it had another name: commencement. We were commencing.

And life in the old place would go on without us, not in spite of us but building upon what we did.

And so to my friends facing retirement or relocation, upheaval or a new place and way to serve, let me share the good words which change everything. 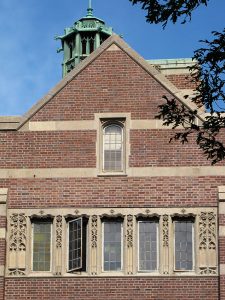