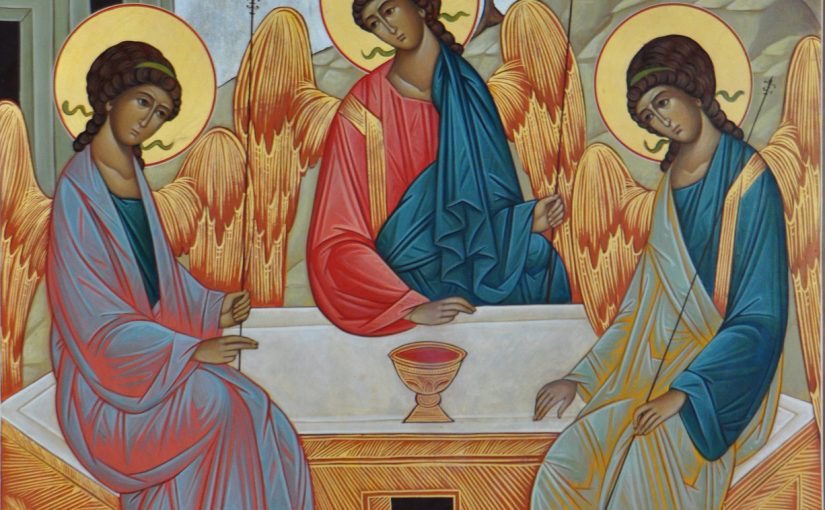 My late father told us a joke about the simple country preacher who counseled his flock to answer the door in their BVD’s if they didn’t know the person knocking. Why, we asked. “Because many have entertained angels in their unnerwears,” was Dad’s response.

We didn’t get it. Dad had to explain that it refers to Hebrews 13:2 “Be not forgetful to entertain strangers: for thereby some have entertained angels unawares.” One Orthodox rendition of the Holy Trinity is also called “The Hospitality of Abraham,” and shows the three angels that he and Sarah hosted, who shared with them good news.

This hospitality to strangers is an essential part of most cultures. In ancient Ireland you were required to offer the stranger at the door the best food in the house. This was also the rule of the desert. It is a Christian duty. But it’s not always easy.

On social media, a mother asked what to do if your child brings home a friend whom you cannot stand. She’d called the child who just visited “bossy, obnoxious, loud, and rude.” The post was removed, and wisely so (it’s a small town), but, the problem is real. I had written a response, and thought that I may as well use it, because sometimes it helps to have a plan.

Here’s what I had written:

Many children have never been to someone else’s house alone before, and children simply have no filter. When I started subbing, I would become upset with students who broke rules. At some point, though, it dawned on me that the children did not know that there was a rule, or why it existed. And so what you can do is help the child learn the rules of a new place. “Our house is small, so you have to use a soft indoor voice.” You can say, “Here, instead of ‘I hate it,’ we say, ‘No thank you, I don’t care for any.'” You get the idea.

You are the Designated Adult, and so it has become your job, while the child is in your house, to gently guide her the way you would want someone to speak to your child.

I think every child has a friend whom the parents would rather were not in the circle of friends. But that child fills a need. The outspoken help the reticent. The athletic help the home bodies. I took each of my children’s friend as a gift that God sent, sometimes for reasons that I couldn’t fathom, but that were sent by God and needed to be honored as guests and treated like beloved family.

You can ask yourself, before saying anything, “What is the kindest way to help the child make better choices?”
Of course if a visiting child hurts your child in word or deed, you need to call the parents and cut the visit short. But second chances, after explanations, are important.

A wise mother also taught me her trick. She keeps small presents, like birthday party favors, on hand and calls them “going home presents.” You don’t get them till you’re leaving. If a child truly gets on your last nerve, you can mention or point out the going home present without actually mentioning that you’d like the child to leave.

Entertaining strangers is a Christian duty. But like most Christian duties, it isn’t always comfortable or easy. The important things seldom are.