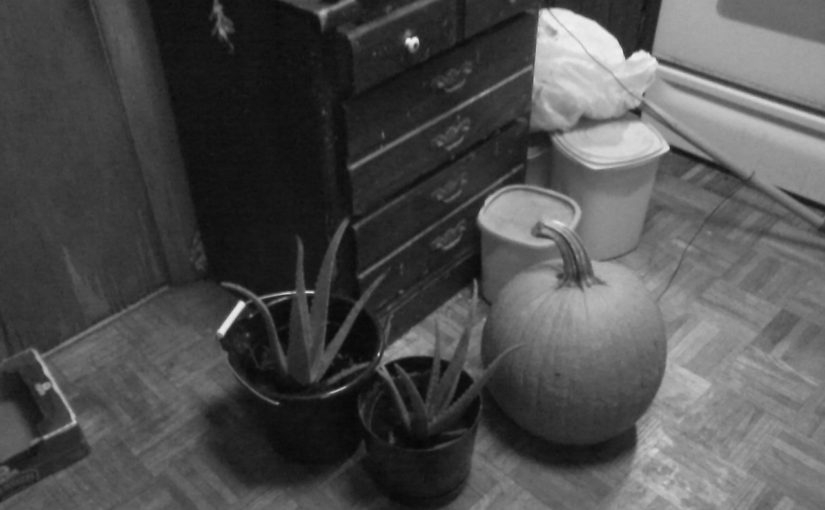 Today I am grateful for the gift of not one but two pumpkins.

A friend who comes to church with me asked me if I use pumpkin. I said yes, I use it my vegan beer brownies* and in cakes, in soups and in pies and as a side dish. She pointed to two pumpkins used in her landscaping and asked if I wanted them when she was ready to change decorations.
I said yes, and expected to pick them up the next week.

However, we had a freeze warning.

Last Sunday she told me she had the pumpkins for me in the garage, and I could get them after church. When she opened the garage door, she led me to a red wheel barrow.. She had stacked them in there; each was the size of a snowman’s base. I have no idea how she managed to lift and wheel them in. “Careful pushing that,” she said as I wheeled it toward my car, “It’s heavy!” And she gave a small smile.

She also gave me two of her aloe vera plants that she’d had in her garden all summer. One will live in the living room, the other in the kitchen.

My brave husband spared my fingers by carving up the first of the pumpkin for me into chunks, and I am cooking them slowly but surely. We had some roasted with nutmeg and butter on Tuesday, and it was delicious, we ate every spoonful. And there will be more. Some for diabetic friendly pumpkin cheesecake, some to mix into chocolate cakes, some to simmer with coconut milk into soups and some to eat like a vegetable.

We have reached the portion of the year where Winter wishes to overtake Fall. The leaves have turned and faded; many have fallen. The days are shorter, the darkness comes faster and remains deeper.  The only way to fight the darkness is love. Love is, among other things, someone protecting her enormous pumpkins, for you, from the squirrels and the frost, so you can bake and share it.

* Beer brownies — in a huge mixing bowl, combine two packages of dairy free brownie mix, one can of pumpkin (14 ounces, or about a cup and a half of home cooked pumpkin), and one twelve ounce bottle of cheap beer. Stir. Spread the mix into two pans according to the direction on the package and bake as directed. Vegan.